Retraction is a mechanism for correcting the literature and a warning for readers in relation to publications that contain serious flaws or erroneous data. As a result of growth and development of Iranian publications in the last two decades, that brings unethical behavior of researchers led to retraction of their publications. We aimed to investigate Iranian retracted publications indexed in PubMed database.

When it is determined that published studies have serious flaws, these studies should be retracted to prevent misleading future readers (1). Retraction is a mechanism for correcting the literature and a warning for readers in relation to publications that contain such serious flaws or erroneous data. Unreliable data can be the result of honest error or research misconduct (2).

Until the 1990s, the concept of retraction of publications received little attention, but after a review on retracted publications and retraction notices in the Medline database, more attention has been given to this subject (3).

There are several reasons for retracting publications, the most important of which is research misconduct, faked data, falsification, ethical misconduct, plagiarism, fraud, multiple submissions and duplicate publications, copyright violations, and ethical norms of research (4–7).

The main concern over the growing number of retracted publications is the consequence of this issue. Researchers whose studies have been retracted may have serious consequences. These researchers decrease scientific production by a median of 91.8% and had a large decline in receiving fund (8).

Unreliable information in medical literature can potentially put patients in danger (9). Since the field of medical sciences deals with human health, this issue may have significant dimensions and consequences. Thousands of patients in serious cases may be at risk when prescriptive behavior and patient management are based on unreliable studies (10).

A considerable amount of literature has been published on retracted articles, some of these studies focus on specific subject areas, including dentistry (12), cancer (7), pharmacology (10), radiology (13), mental disorders (14) some of these studies focus on broad research area of biomedical and life sciences topics (1,9,11,15–19) as well as a comprehensive study has been conducted on retracted publications and authors for gathering retracted publication 42 data sources were consulted (20).

This study was performed using PubMed database on Jul 10, 2018. Covering all Iranian retracted publications published in PubMed up to Dec 2017 have been retrieved using the following search strategy: Retracted Publication[sb] AND Iran[ad]

Fig. 1:
No. of Iranian retracted publications in Pub-Med by year (total=164)

Studying time interval between publication date and retraction notice date revealed that the minimum time lag was zero month (the article has been retracted right at the issue that has been published(25)) and maximum time lag was 8.4 years (mean = 20.8 months).

From 164 retracted publications, 161 publications were indexed in Scopus and 142 in Web of Science. Regarding access status, 83 of them were published as Open Access. Overall, 88 journals have published Iranian publications. Top 10 journals are presented in Table 2. 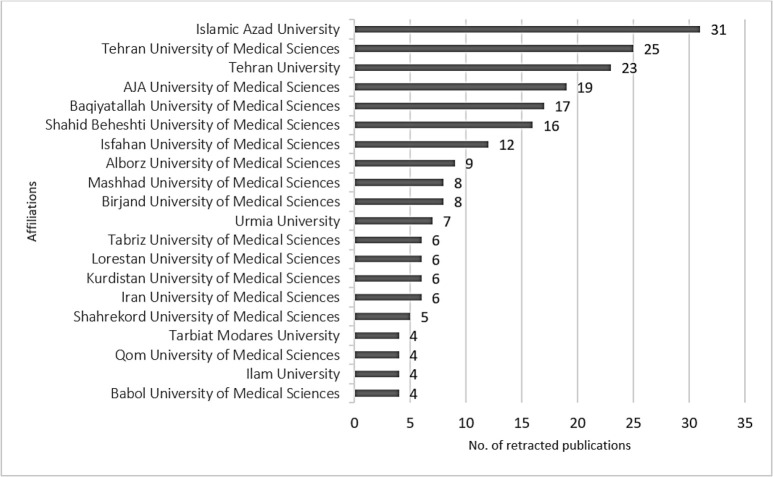 Fig. 2:
Top 20 Iranian affiliations with the most retracted publications in PubMed

Most of publications have been issued by editor in chief with 129 and publisher 82. Other issuers respectively were authors with 21, associations 18 and 6 by third parties. The results indicate that most of the frequency of retraction reasons were authorship issues, plagiarism, and redundant publication. These frequencies presented in Table 3 add up to over 164 because some notices gave more than one justification for the retraction of one publication.

Reasons for retractions of Iranian publications

The mean time lag between the publication of the original Iranian publications and the retraction notice was 20.8 months. Another study observed a mean time of 3 years in PubMed notices of retraction (4).

The present study showed that the reason for retraction of largest proportion of Iranian publications were authorship issues followed by plagiarism, redundant publication, overlap, misconduct and honest error. On the other hand, another study identified 74 retractions in dentistry publications indexed in MEDLINE showed that articles were retracted due to redundant publication (20.8%), plagiarism (18.1%) and misconduct (13.8%) (12). Similar findings were also obtained in a previous study (20) who observed that questionable data or interpretations and plagiarism were the most cited reasons for retractions. The most cited reasons for retractions were mistakes(honest errors), plagiarism and duplicate submission (17). Several attempts to positively influence the outcome of peer review process have occurred in several journals by authors or third-party agencies suggesting fabricated reviewers. This maybe the reason why authorship issues (including fraudulent peer review) is the reason for the largest proportion of Iranian retracted publications.

Retracted publications continue to be cited as valid studies after retraction notices had been issued and only 14 citations acknowledged that these publications were retracted. This kind of pattern has been observed in previous works (3,17, 30) in the same manner.

This research has been supported by Tehran University of Medical Sciences & Health Services grant no. 37765-31-01-97.

The authors declare that there is no conflict of interest.

(2011). A Retrospective Analysis of the trend of retracted publications in the field of biomedical and life sciences. Sci Eng Ethics, 17(3): 459–68.